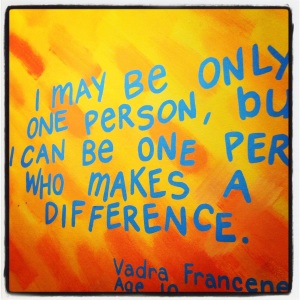 Fear. This phenomenon affects almost every person we meet in our daily lives and yet, is never fully addressed. I believe understanding our fears is the key to overcoming them. Jerry Seinfeld talked about fear during one of his stand up comedy routines. At the time, in the United States, the number one fear was public speaking. Number two was death. “Death!” he proclaimed, “Death? That means that at a funeral, you would rather be in the casket than giving the eulogy.”

Can you guess what the most common fear of the American people is today? A break in service…as in no bars, no signal. The term phobia is one way we hear about chronic fear today. In a recent study, TIME magazine found over 50 million Americans are plagued by some phobia today. There are many that you or I would recognize but many others border on the ridiculous. There is a fear of chickens, of ventriloquist dummies, and bald people to name of few. I mean there is even a fear of phobias- phobophobia. It is my personal belief that these terms will only grow in years to come. Why? People like to identify with something. Hearing that their condition has a name provides the comfort of identity in an alienated world. There are many irrational fears but how about we talk about a completely common and normal one.

Can you identify with a fear of failure?

When I listen to entrepreneurs speak on their successes, many say they would never have chosen their business if they had known how hard the road would be. So why did they do it? I’ve heard one recurring theme- youth. They were too young to be discouraged or put off by naysayers. They had a vision and intended to follow through on it. Consequently, that vision and passion holding a lot more weight than a thorough business plan to Venture Capitalists these days. The point is that Youth doesn’t know or recognize fear of failure nearly as much as someone that has seen his or her share of hardships. Kids dare to dream and change the world. Ask a kid what he wants to be when he grows up and you will most likely get a response like the president or an astronaut. If you ask an individual recently unemployed or laid off by this recession the answer will be very different. Of course there are exceptions but don’t miss the point. I remember my Dad put this career question to me at the ripe age of ten. With a smile, I responded, “I’ll be an athlete first and then an entrepreneur and then a teacher. When I retire I’ll run for president.” Not to toot my own horn (because I’m far from any of these positions) but I knew how to dream even at that age. Kids seem to know something that the elders don’t. Or maybe its what these kids don’t know. Either way, you are free to come to your own conclusion. I think we should be fearful of something far more crippling than failure. Average.

Average, mediocre, pedestrian, common place, ordinary, run-of-the-mill- call it what you like. This attitude affects far more people than any fear or phobia. This is what happens when you grow up. I’m ten times more worried that sometime in my twenties, I’m going to realize the grass isn’t greener on the other side. I’m going to say, “Well Drew, this is the real world and you better get used to it. Smile and do your job and someday you might have a nice retirement.” Actually, I’m terrified of this. My Dad told me I’m extraordinary and I plan to be.

Flipping fear on its head allows me to use it to my advantage. Fear of the average gets me up in the morning. It pushes me to separate myself from the gradual curve because I want nothing to do with the mean, median, OR mode. I want to be an outlier. I want to look at failure as lesson and, if I can, learn from other’s mistakes. God knows I’ve made enough on my own. I’m not saying that a wife, a dog, and 2 ½ kids is bad. If you’re happy where you’re at, that trumps all else. I’m talking about those of us that say, “I don’t really hate my job but I don’t like it either. I would do something else but everyone told me this is my only option or my only strength.” Are you LISTENING to yourself? Do you realize the path that you are sending yourself down? I heard once that “Someday” is a disease that will take your dreams to the grave with you. I listen to too many people start sentences with “I wish I would have…” and not enough “I’m so glad I did…” This fear is the reason I started blogging this New Year and Journaling on a daily basis as a measurement tool. It’s why I start everyday at the gym listening to Business podcasts instead of music. It’s how I realized the need for me personally to be involved with people who hold me accountable. The Progressive Group just hit the one-month mark with our meeting last night. One month of consistent behavior from strong friends holding each other accountable to their short AND long term goals. Life is too short for me to do anything different. There is no excuse for you to not be taking what you want out of everyday. Come on now- Carpe Diem is a pretty old concept.

There is one thing we are all poor in and that is TIME. Every person is given the same amount of hours in a day but tomorrow is not guaranteed. You need to take your fear of failing and turn it around. What if you don’t apply for that job? What if you never move away from home? In Napoleon Hill’s book Think and Grow Rich, he tells a story about Thomas Edison’s assistant. This man was determined to be Edison’s assistant. He was so determined that he woke up one morning, sold all his belongings, and road as a vagabond in boxcars down to Edison’s lab. When he arrived, he told Edison he was there to be his assistant. After several attempts to turn him away, Edison consented to his doing some sweeping and cleaning duties. The point is the man eventually became Edison’s primary assistant. What if you sold all you had and wholeheartedly risked it all to go and follow a dream? I ask because this doesn’t exist in our society. There is always a “fallback plan” and young people end up settling for what’s easy instead of determining to carve out the destiny they dreamed of. Quitters never win and winners never quit. Redefine determination and flip fear on its head. What happens if you don’t? The first thing to die will be passion, then hope, and then the dream itself which will be fleeting memory of ‘when you were young.’